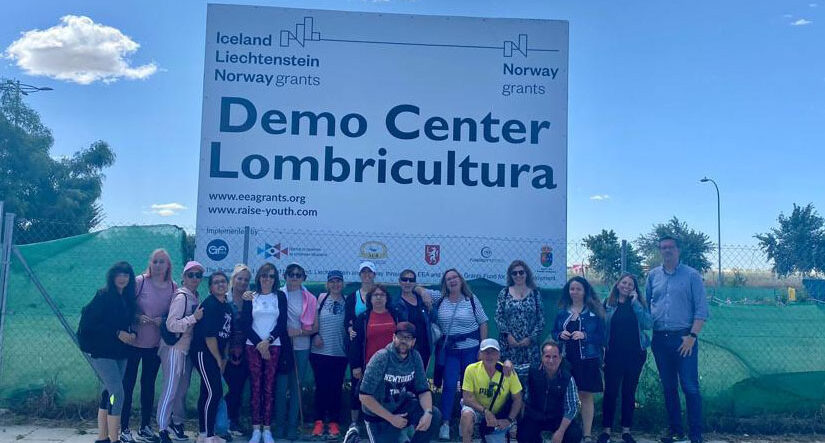 Residents of Torrejón de Velasco have visited the RAISE DEMO Center in Casarrubuelos – the First Vermicomposting Demonstration Center in Europe – to see first-hand what is being done in this Circular Economy Centre, a pioneer in the recycling of organic waste through composting and vermicomposting.

This vermicomposting demonstration center has been established in Casarrubuelos thanks to the RAISE Youth Project, a European project funded by the EEA & NORWAY GRANTS FUND, launched by the City Council of Casarrubuelos, which presented this pioneering idea for the recycling of municipal organic waste in a sustainable and ecological way, in search of social commitment to the planet and compliance by government entities with the environmental objectives of the 2030 Agenda.

The participating residents of Torrejón de la Calzada were delighted and very interested in the work for the environment and the health of our fields – and our municipalities in general – that is carried out in the Casarrubuelos Vermicomposting Demonstration Center.

The RAISE DEMO Center of Casarrubuelos is a center for youth green entrepreneurship, where training is given in subjects such as Circular Economy, Composting, Vermicomposting, Gardening… all with the aim of improving the employability of young people in the area, always from a sustainable and environmental approach. This collaborative space also has 14 urban gardens cultivated by the community, encouraging neighbourhood cohesion, consumption and the exchange of local natural products. It is also the place where part of the organic waste generated by the municipality is recycled, managing not only to eliminate this waste, but also to obtain ecological compost / worm castings using this municipal waste as a raw material.

It is interesting to note that all the green spaces and municipal gardens are fertilised with the ecological compost produced at the DEMO Center of Casarrubuelos, and the surplus produced in each harvest is distributed free of charge among the neighbours and volunteers of the centre. Casarrubuelos is now self-sufficient in the production of fertiliser; this also means savings for the municipal coffers and a reduction in the carbon footprint or environmental impact produced by this town in the south of Madrid.

For all these reasons, the Casarrubuelos DEMO Center has already aroused the interest of numerous local political representatives from other municipalities who have also wanted to learn more about how Casarrubuelos recycles its organic waste. Among them, D. Andrés Real, 3rd Deputy Mayor of the municipality of Torrejón de Velasco, councillor, among others, of the areas of Agricultural Policy and Environment, who also wanted to accompany his fellow citizens throughout the visit and the training in Circular Economy, composting and vermicomposting received by the attendees. He was interested in the work being done in Casarrubuelos, as well as in the possible ways of implementing this easy, sustainable and ecological system of organic waste recycling in the municipality of Torrejón de Velasco, a traditionally agricultural town, very committed to the countryside and respect for the environment.

The attendees also knew first-hand what the European RAISE Youth Project is and what it aims to achieve, as well as which other countries participate and collaborate with each other thanks to this project. Project financed by the FUND: EEA and Norway Grants implemented in Spain by Casarrubuelos Town Council. Entities thanks to which the creation of this Vermiculture demonstration center in Casarrubuelos has been made possible.